For Emergency Reach Us 24/7

What is avascular necrosis of Femur (AVN)?

Avascular necrosis (AVN) of the femoral head is a pathologic process that results from the interruption of blood supply to the bone. Compromised femoral head blood circulation leads to ischemia which in turn results in the death of marrow and osteocytes and collapse of the necrotic segment. As a result, the articular cartilage covering the hip bones also collapses, leading to disabling hip arthritis.

What are the risk factors for AVN of Femur?

The common risk factors include, 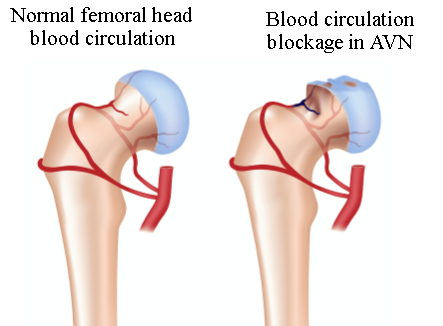 AVN of Femoral Head is common in?

More common in people between the ages of 40 and 65. Men develop AVN of the hip more often than women.

What are the symptoms of AVN of Femoral Head?

The common symptoms include,

What are the stages of AVN of Femoral Head?

There are four stages of AVN. The disease can progress from stage I with mild pain in the groin to stage IV with severe pain and limp while walking.

How the AVN of Femoral Head treated?

The most successful treatment options are surgical. Patients with AVN diagnosed in the early stages (before the Femoral Head collapses) are potential candidates for hip-preserving procedures.

What is core decompression?

Core decompression involves drilling one larger hole or several smaller holes into the Femoral Head to relieve pressure in the bone and create channels for new blood vessels to nourish the affected areas of the hip.

Core Decompression is successful in preventing collapse of the Femoral Head and the development of arthritis when it’s done in early stages (stage I and II).

What is Core Decompression and Bone Grafting?

Core decompression is done with one larger hole into the Femoral Head and the hole is filled with the bone graft harvested from fibula (in the leg) or synthetic bone grafts.

When is Total Hip Replacement surgery indicated in AVN of Femoral Head?

When there is collapse of Femoral Head and arthritic hip joint associated with severe pain and painful movements with restricted activities. Total hip replacement would be the best option.

How is Hip Core Decompression done?

Usually done under spinal anaesthesia. Surgeon makes one small key hole in the lateral part of hip. Under image control (C-arm) one drill hole was made into the Femoral Head necrotic area. The bone graft is introduced into the hole.

What is REGROW therapy for AVN ?

This involves growing patients own bone forming cells (Osteoblasts) from his own blood helping to heel the necrotic dead bone in the AVN of femoral head.

This is done in following steps

Step 1: A small quantity (4ml) of your blood is taken from bone marrow

Step 3: Isolation and culture of Osteoblast cells in the lab

Step 4: Expansion of cultured osteoblast cells for 4 to 6 weeks in the lab

Step 5: Implantation of cultured osteoblastic cells in the damaged Femoral Head to form the new bone.

How long do i need to stay in hospital after the Hip Core Decompression surgery?

Many Core Decompression surgeries are done on day-care basis and do not require you to stay overnight in the hospital.

End Your Pain Here, Visit Us

Feel Free To Rach Us

Designed with ♥ by The Digi Galaxy